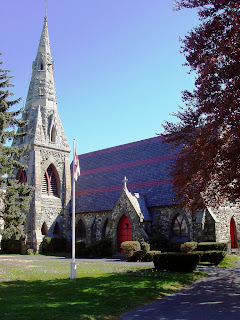 We will be signing a contract this week with Murray Brothers Construction who has hired us to restore the steeple and entryway to Grace Episcopal Church in Medford, Massachusetts.  This is H. H. Richardson's oldest extant structure and provides some really interesting foreshadowing as to what was to come from one of America's foremost architects.

First of all, lets consider the slate roof.  Richardson specified that the materials for his slate roofs come from two sources: black slate from Monson, Maine, and red slate from Granville, NY.  Both are among the hardest, densest slate ever quarried in the world.  Yet the field of this roof is comprised of purple slate from Vermont.  Why?  Because the slate in Monson wasn't discovered until 1870.  Mystery solved!

Another very interesting motif associated with Richardson's version of Romanesque styling is present here.  Who isn't familiar with his trademark use of rusticated, light-brown Milford granite in the field of his masonry walls and Longmeadow brownstone for the dressings?  Instead, here, we have a native granite for the quoins, dressing and trim, and "glacial boulders" for the field. This is extremely similar to his now-demolished Church of the Unity in Springfield.  We'll take special care to replicate the high lime mortar identified through testing and analysis.  I will update this blog regularly with pictures of the repointing work as it progresses.  When you work in the historic preservation field this is the type of project that you strive to be a part of! 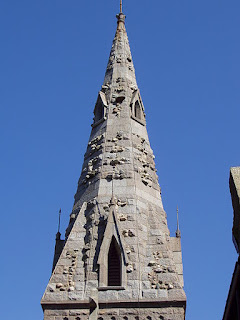 The below information comes from the Wikipedia article "Grace Episcopal Church (Medford, Massachusetts.)"  The only alteration I made is in respect to the slate roof colors which the had -incorrectly - as gray with red bands. It is, in fact, purple with red bands:

The Grace Episcopal Church is an Episcopal church designed by noted American architect H. H. Richardson, with a major stained glass window by John LaFarge. It is located at 160 High Street, Medford, Massachusetts and now listed on the National Register of Historic Places.  The church was constructed 1867-1869. It is one of Richardson's earliest works and the second of his churches (now the earliest remaining since his Unity Church, Springfield, has been demolished). Its cornerstone was laid in 1867 but by August 1868 it was evident that construction costs would exceed the budget. After the Brooks family covered the remaining construction costs, it became a private chapel under Episcopal law. In 1873 the family delivered the church to the parish, and it then was consecrated by the Bishop of Maine. 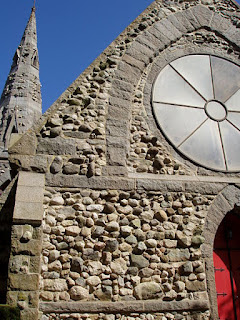 The church is designed in a picturesque Gothic style with 90-foot (27 m) high steeple (square base, octagonal spire), asymmetrical massing, and rough-cut walls of glacial boulder with granite trim. A massive slate roof, in purple with bands of red slate, dominates the nave's low walls and the five-sided apse attached to its east wall.  The church has undergone extensive modifications from its original design. In 1882 a Sunday school annex was appended, in 1883 the nave interior was redecorated, and in 1957 further additions were made. In 1962 the chancel was reworked and Richardson's original altar given to the Brooklyn Museum. In the early 1970s Richardson's dark-stained interior was replaced by a brighter woodwork. As of 2007 only the pulpit remains of his original interior. LaFarge's window, "Rebecca at the Well", forms the center of the nave's south wall, and was probably installed in 1884 or 1885.

References:
Photo updates from the project: 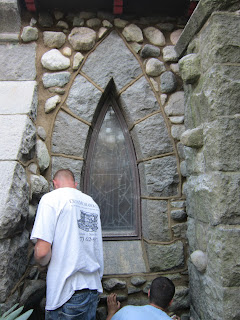 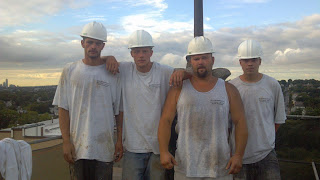 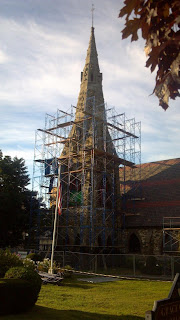 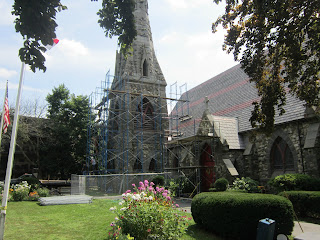 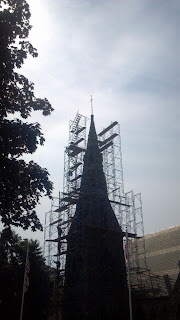 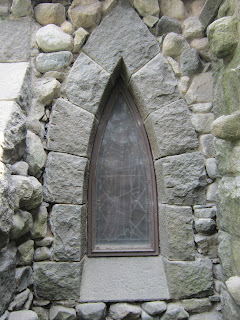 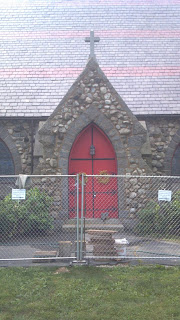 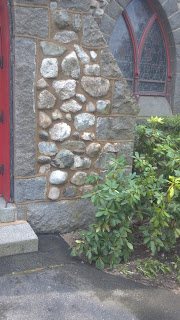 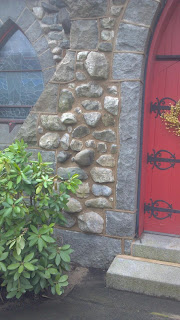