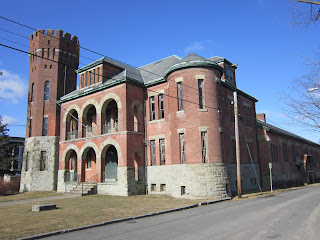 Last Spring I completed an historic structure report for the present owner of the former NYS armory in Hudson, New York.  I also submitted paperwork to the NY State Historic Preservation Office to have the armory included on the National Register of Historic Places.  I received word earlier this week that SHPO has reviewed and accepted my submission - - it's been sent to the National Park Service for final review.  Plans are being drawn up now to repurpose the structure as a new home for the library.  Below is an excerpt from the historic structure report:

The Armory as a New Building Type


The term armory was introduced in the militia’s vocabulary in the 1860’s and used almost exclusively after 1870 to describe facilities built or adapted for the sole use of the militia.  However, it was not until 1879 when the Seventh Regiment erected its armory in Manhattan’s Upper East Side that the term came to define a new, uniquely American building type.  Because of its scale, prominence, setting, design and decoration, the Seventh Regiment’s armory on Park Avenue was—and still is—regarded as the epitome of the building type. 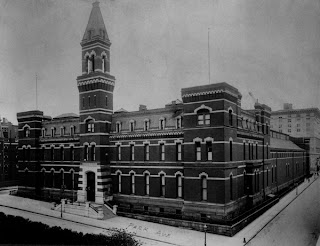 In general terms, armories built after 1879 were structures that served many purposes, the foremost of which was the headquartering of local militia units.  They are all two part buildings: a forward administration structure with attached drill shed to the rear.  Many, such as the armory in Hudson, were castellated fortresses whose design was derived from the medieval European, gothic military architecture they sought to emulate.  The characteristics of the building type can be divided into four categories:  function; form, layout, and construction; location and setting; and architectural design and decoration. 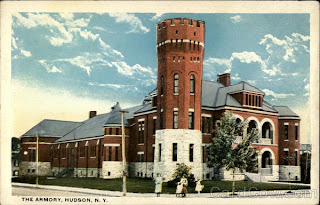 
As far as layout and construction are concerned, armories built after 1879 followed the model and design of the Seventh Regiment:  multi-storied forward structures for office and administration with massive drill sheds attached to the rear.  All late nineteenth century armories were masonry structures that featured load bearing walls.  Aesthetically, the administration buildings dominated the design and appearance of armories after 1879; functionally, the drill sheds were their reason for being.  Practice on the village green was often impeded by weather; the need for a climactically controlled space, year round, was the reason for the advent of the new building type.


The construction of the drill sheds, often tens of thousands of square feet of open space, required the use of state of the art engineering and technology, particularly the use of enormous steel trusses to support the vast roofs of the sheds.  The inspiration for the massive open floor spaces was the relatively new train shed building type (Grand Central Depot, New York, 1871) and the exhibition hall (Centennial Exhibition, Philadelphia, 1876.)   In the Seventh Regiment’s and all extant, subsequent drill sheds, the truss work remained exposed, a hallmark feature of the armory building type. 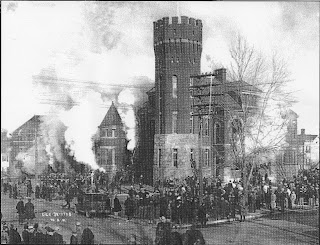 
The design of the Seventh Regiment and all armories erected after 1879 was most influenced by the architecture of European castles and forts built between the 12th and 15th centuries.  Like the structures that influenced their design, armories featured towers with battlements and crenellated parapets, battered masonry walls, tall, narrow windows with steel bars, and gated portcullises and sally ports.  But these were not for aesthetic purposes alone.  The armory was a fortress in times of unrest that could withstand a siege, and its militia could fire upon rioters from those towers and through those windows.


History of Building, Occupants and Architect


The Building – The Armory in Hudson 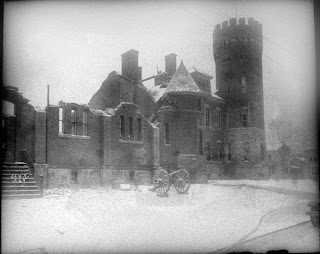 Twenty years after the formation of the 23rd Separate Company on the 24th of May of 1878, plans were made to erect a new company-sized armory in the City of Hudson.  The new armory was designed by architect Isaac G. Perry and is remarkably similar to his other armories in Whitehall, Tonawanda and Ogdensburg, all of which are listed on the National Register of Historic Places.  The armory cost $6,000 to build and was paid for by Columbia County.  Prior to the construction of the new armory, the rear of the courthouse was used for meetings and administrative purposes; the unit drilled on Washington Park.  The administration building most closely resembles his armory in Hornell; the drill shed there, however, is perpendicular rather than at the rear.  The Hudson armory features a raised and battered stone foundation, a tripartite, arcaded entrance pavilion and a four story tower topped with a crenelated parapet.  A shorter tower with a conical roof creates an asymmetrical façade typical of Perry’s armory designs.  A major fire on December 31, 1928, destroyed much of the interior; repairs were completed in 1930.


The Occupants – Military Units Stationed in the Armory 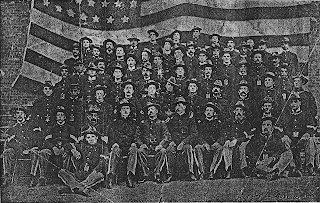 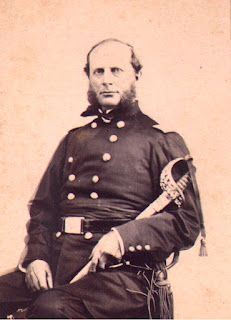 David Smith Cowles was born in Hudson in 1817.  The son of a Congregationalist preacher and educated at Yale, he entered the practice of law and eventually established his own practice.  Cowles served as district attorney in Columbia County for three terms.  When war erupted in 1861, he felt compelled to volunteer and served as a Colonel in the 128th Regiment.  On May 27, 1863, at the Battle of Port Hudson, he was killed after leading his troops against a rebel surge, preventing the lines from being overrun.  His death and subsequent funeral were well documented in the media and he remains a celebrated figure in the history of the City of Hudson. 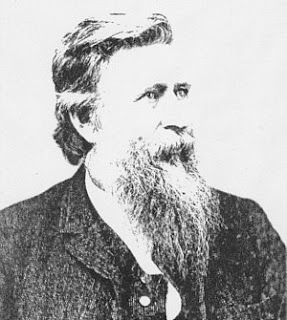 
Born in Bennington, Vermont, in 1822, Isaac Gale Perry was raised and educated in Keeseville, New York, where his parents had relocated in 1829. Between 1832 and 1854 he completed an apprenticeship and entered into partnership with his father, Seneca Perry, a shipwright turned carpenter. By 1847, Seneca Perry and Son were advertising locally as carpenter-joiners who undertook masonry work. The Perrys were well known for their skills at constructing spiral staircases, and the younger Perry, according to one biographer, earned a local reputation as an architect before leaving Keeseville.


Isaac Perry's architectural work in Keeseville is not well documented, but it is likely that the Emma Peale residence, called "Rembrandt Hall" (1851), a Gothic Revival-style Downingesque cottage that contains a spiral staircase by the Perrys, is an early design. By 1852, Perry relocated to New York to apprentice in the office of architect Thomas R. Jackson (1826-1901). Jackson, who migrated from England as a child, rose to the position of head draftsman in the office of Richard Upjohn (1802-1872).  The New York State Inebriate Asylum (1864) was the first major project designed and constructed by Perry, and marked the turning point in his architectural career. Perry's inexperience is evident in Turner's account of the building's design. Perry later recalled that he penciled the plans with the assistance of his wife, Lucretia Gibson Perry. He also appears to have been assisted by Peter Bonnett Wight (1838-1925), the head draftsman in Jackson's firm, but Wight's role in the project is not well documented.

Perry is credited as the architect of about twenty armories in New York State, but supervised, and should possibly be credited for, as many as forty.  Many are listed on the National Register of Historic Places.  Perry is considered to have been the first state architect in New York.  Governor Grover Cleveland appointed him to oversee construction activities at the state capitol. Perry was commissioned lead architect for the New York State Capitol and served from 1883 to its completion in 1899.  He was the third and last architect of the project and designed a dome for the capitol that was never built.  Although his official title was "Capitol Commissioner," by the mid- to late 1880s, Perry had oversight responsibility for all state government building programs and he was commonly referred to as the "State Architect."  He retired in 1899, and the state legislature officially created the Office of the State Architect that same year.
FOR MORE INFORMATION ON HISTORIC PRESERVATION CONSULTING SERVICES CLICK HERE
Posted by Unknown at 9:06 AM